Back in 2017, when Prime Minister Narendra Modi visited in United States a lot of things were in news. The Madison Square Garden performance, the Silicon Valley tech HQ visits, and famous hug with the President. Among other colorful stuff, there was an announcement buried that India & United States have signed an agreement to allow “low risk” Indian citizens to be eligible for Global Entry. That announcement was exciting for me. Everytime I take the long international journey from India to United States, there’s a long queue at immigration for non-citizens.

New SeaTac airport record with 30 mins of taxiing, 2hs of immigration and now 1hour to just get out of the airport??? pic.twitter.com/Ji3MxRFL0k

In my hour plus long wait I would usually observe the presence of a few Global Entry kiosks near immigration. Eligible users can bypass the regular queue, plug in their details, and voila! They are welcome in the country. When I looked up more details, I was disappointed to know that this wasn’t available to me, an Indian living on visa. But these recent announcement changed things. But there was a twist, they had mentioned it is for “low-risk” travellers. Objectively, I would rate myself as innocent & low risk. But I can see how a brown, single, 20s person may not live up to the immigration low-risk bar.

Regardless, when the applications opened up, I applied, fearing that there might be a lot of interest and I might just end up in yet another queue. After a few weeks came the twist. Applicants had to clear a background check by Indian authorities by visiting India in person. How would you deflate interest in any promising thing? Leave them at the mercy of Indian bureaucracy. This painful twist came to bite us all, and H1bs and wannabe H1bs did what they do the best - complained on twitter about the process. I can be labelled as a hypocrite for this, as I did the same, by tweeting to CTO of passport seva directly. I got the perfect Indian bureaucratic response for the same.

I let the issue rest then. I don’t travel internationally as much, and thought about picking it up before next India travel. Secretly hoping for a process change to make it easier to get a background clearence. But nothing did. I would assume Indian authorities would be thinking - why would anyone pay $100 to join a program expedite once a year queue for US immigration. What actually made the Indian applicant pool big was the fact the premium credit cards (like Chase Sapphire Reserve) [offer to cover the fees]https://www.chase.com/card-benefits/sapphirereserve/travel). Anyways, a few weeks before my trip I try to get things moving for a background check from India. The “Passport Seva” center needed me to pay an additional 500 Rs, to cover their side of formalities. Not a big amount, but you still need to pay for something that is just a convenience, not a necessity. If you are near that stage in your application, you should ideally try to set up appointment less than seven days from your planned interview, because the fancy portal won’t let you go beyond that.

I had never been to Passport Seva Kendra. Passport renewals can be done more easily in consulates abroad, and I did the same. Although it made an interesting case where I had a US address as my permanent home address on an Indian passport, a case for which Passport Seva Kendra portal was never tested. I lined up for my appointment regardless using my shiny Aadhar card which had an Indian address. I’ve read how Aadhar had become hot shit over the years in India and should be sufficient for any proof. The PSK folks were confused about GEP but tried their best. They did fingerprint me though, I thought they should be able to pick up everything from the most secure database in the country - UIDAI, and they had everything there. My file was given a case number, and next came the police verification.

I get a call in a couple of days requesting me to the local police station. Ofcourse, why would local police come to actually verify the address. I show up with all the documents to police thana. I had only seen those places in movies where the hero gets locked up. It was a little intimidating as well. What if one the officers didn’t like me and just lock me up instead? The officer supposed to work on my case was out on a tree break. There was a phone number listed to contact the officer, which I dialed. The officer replied he’ll be back in 15 minutes. Let’s be real, we know those 15 minutes actually meant a wait of 2 hours. The officer is expectedly clueless. He mistakes Global Entry for Police Clearance Certificate which Indians working in Middle East need to secure. This meant a complete bio of my life, education, job, my neighbor’s middle name, my milkman… I decided to keep playing, furnishing every possible document. It dawned on me after I was done that it was not the white papers he was actually in for, and I could have cut down questioning and everything by using the green notes instead(aren’t the new ones pink/yellow though?)

Done with police verification, came in the black box of approvals from other authorities. After some information digging this process actually involved my file being passed among Ministry of External Affairs, Income Tax department and even RAW. Just to get a background clearance for expedited entry. This stage takes months, but doesn’t require your physical presence in India but there would be no transparency as to where the application currently stands.

In the meantime, the Global Entry portal was changed into an unified Trusted Travelers portal where I would periodically check my application to see if Indian authorities have given the final go ahead signal. Roughly six months after police clearance, the status changed and I had been conditionally approved. The last stage involved making an in-person appointment with the folks who man the immigration booths and run the Gloabl Entry program - CBP. Getting an appointment was quick for SeaTac airport, the interview even quicker where different things about the program were explained. A day later my status changed to Approved. It was finally done! ch-ching! 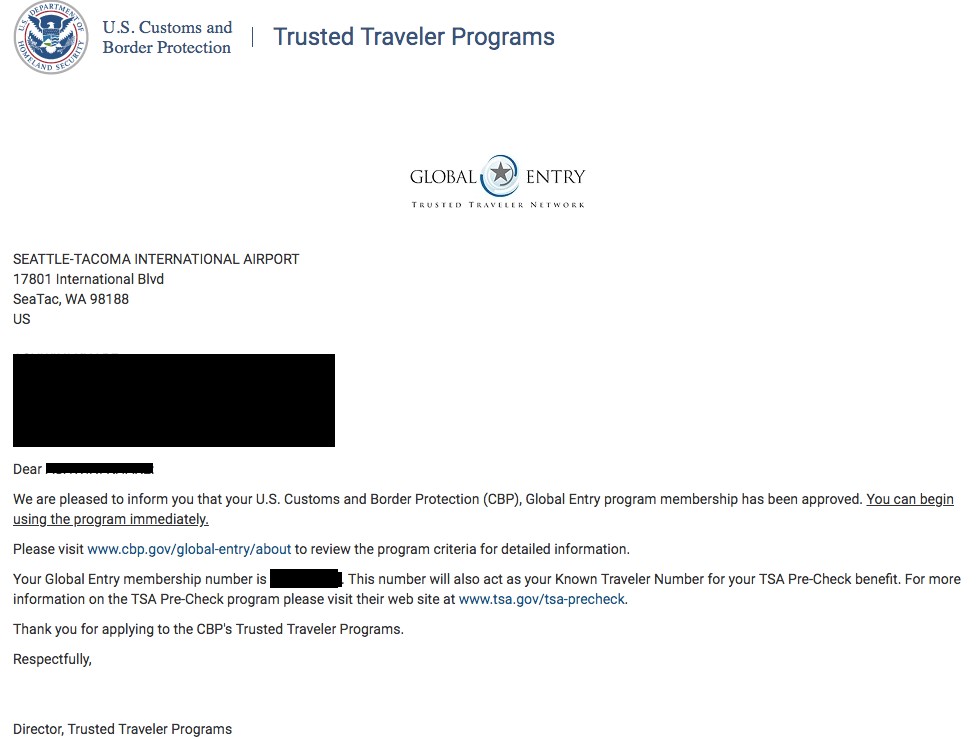 One would think, was the hassle worth it? Maybe. Because with Global Entry comes TSA precheck. Once approved for Global Entry, even though I won’t get a Global entry card for being on visa, but I get a Known Traveller Number which can be used for PreCheck. If you haven’t flown out of SeaTac, you might not know the value in expedited PreCheck but for me it is completely worth it to avoid potentially standing hours in security line to fly even domestic.